Ignition and Combustion of Metal Powders 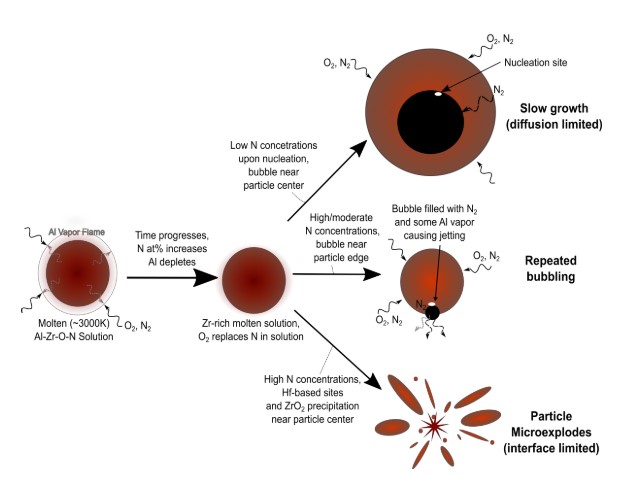 In this project, we focus on understanding the various ignition and combustion mechanisms of reactive powders so that they can be tuned for a wide range of applications. In most cases, we use metal powders as fuels due to their high heat release upon combustion. Particularly, we want to lower ignition delays, enhance the total heat release by combustion, control the time scale over which the release occurs and control the nature of products formed for targeted applications. This involves understanding how the micro-structure, chemistry and size of the starting powders impact their ignition and subsequent burning. We are also interested in understanding the mechanisms leading to ignition and describing complex multi-component and multi-phase metal combustion, that often leads to higher reaction efficiencies. For example: with the launch of the MSEE URA, we are now developing reactive fuel powders with Al, Mg, Zr and other elements for thermal and chemical deactivation/degradation of chemical warfare agents. We explore the effect of these materials with tuned performance to favor the production of oxides useful for catalytic degradation and for generating high energy release/temperatures with long/short burn durations. Our studies utilize DIMP, a sarin simulant and includes understanding the role of thermal and chemical degradation, environment on degradation as well as determining the kinetics for this complex reaction.

Our approach includes translating the fundamental materials knowledge gained from studying model powders made initially by physical vapor deposition (PVD) to studies of powders made by high energy ball-milling, a more scalable synthesis method. Because of the extreme temperatures, pressures and rates of reactions observed as these materials ignite and combust, another area of focus is the development and utilization of novel characterization techniques and experimental tools for capturing the events and analyzing the data. This has led to the development of varying ignition devices (hot wire filament and cold plasmas) to explore the effect of heating rates and thermal/non-thermal effects on material reactions as well as x-ray phase contrast imaging(XPCI) and high-speed spectral imaging using the novel Snapshot Hyperspectral Imager for Emissions and Reactions (SHEAR) tool.

For hot wire studies, a thin coating of powders is applied to a nichrome filament, which is resistively heated by a DC source at rates of 1000 K/s to 10,000 K/s. 2 color pyrometry, spectrometry and high-speed videography are used to synchronously record the time of ignition event and measure the ignition temperature of the material based on the heating rate of the wire. This tool is often compared to other low – temperature thermal analyses (DSC, DTA) conducted at lower heating rates to identify low temperature reactions leading to ignition. It is often used to assess the effect of micro-structural changes due to milling and other material modifications on low-temperature reactions for various materials.

In this project, the group explores the phenomenon of having simultaneous multi-phase reactions during high temperature combustion. In theory, in the absence of a shockwave, most metals predominantly burn in a single phase (vapor or a condensed phase: liquid or solid), dictated by its boiling point and the dissociation temperature/boiling point of its corresponding oxide. This premise has been established as the Glassman criterion and has governed and aided in the design of solid propellants and explosives that utilize metals as fuel additives. For example, Al and Mg evaporate and burn in the vapor phase while Ti, Hf, Zr and B burn in a condensed phase, typically as molten droplets that undergo heterogeneous surface reactions with a gaseous oxidizer. However, in more complex metallic systems, when metals with different burning modes are combined, the resulting material burns in two phases and the mechanisms driving both modes of combustion are not well understood. An example of such is the Al: Zr system, where Al burns as a vapor and Zr as a condensed phase, a molten liquid droplet with subsequent micro-explosions in air. This is referred to as dual-phase combustion. Thus far, our group has established that the binary Al:Zr system has lower ignition thresholds and higher combustion efficiencies compared to its pure, elemental starting powders. We therefore seek to investigate what other potential elements (such as Ti or Hf) demonstrate this phenomenon; prepare, test, characterize and tune their performance by incorporating other elements (Mg, B, C), and burn them in varying environments on a single and multi-particle basis. In the end, our goal is to develop a mechanistic model describing multi-component or multi-phase combustion that can be utilized in hydrocodes and other multi-scale models. Selected frames from the exploration of Al, Mg and Ti composites undergoing dual-phase combustion and micro-explosions are shown in Figure 4 illustrating how binary and ternary composites undergo both vapor and condensed phase burning.

This project, funded by the Defense Threat Reduction Agency, is focused on developing a combination of reactive fuel materials with biocidal and chemical neutralization capabilities. The aim is to develop reactive composites with tunable ignition and combustion performance that enable a combination of thermal and/or chemical inactivation of biological/chemical agents over a range of timescales and relevant length scales during a blast. The approach involves the use of multiple metals in composite powder structures. The composite powders offer mixing on nano to micrometer length scales, and release of large amounts of heat which can partially or fully melt the particles. When heated, the powders react at low temperatures yet are able to oxidize in air and burn at higher temperatures with greater efficiencies than their corresponding commercial counterparts.

Recently, most of our research efforts have shifted towards chemical warfare agents (CWA) with the launch of the MSEE URA led by The Johns Hopkins University. This project focuses on improving our ability to neutralize CWA simulants such as Di-isopropyl Methyl-Phosphonate (DIMP) utilizing composite metal powders synthesized in our laboratory. These powders have previously shown efficacy towards defeating bio-agent such as anthrax, and preliminary studies demonstrate their potential towards chemical-agent defeat applications.

Below is a slow motion video of reactive particles mixing with HIO3, which decomposes into biocidal iodine gas.

Our lab is designing and building a combustion chamber to perform experimental combustion studies. That chamber will include the following capabilities:

These diagnostics aim to explore the role of composite metal powders in CWA simulant neutralization by characterizing reaction profiles and mechanisms from a thermal property standpoint, as well as chemical properties. Beyond chemical-agent defeat, this chamber provides the ability to study combustion behavior over longer distances. The chamber will utilize a non-thermal plasma ignition system which will allow for a better understanding of the particle reactivity in chemical-agent defeat or combustion studies without the large pressure or thermal input associated with traditional explosive-charge or flame ignition methods.

The modular combustion chamber provides a wide range of experimental capabilities. Initially these will aim to address how we can tune composite metal powders to enhance chemical agent defeat from both a thermal-kill and chemical-kill perspective. By using burning metal particles to interact with and neutralize chemical-agent simulants, we are not only exposing simulants to elevated temperatures, but also generate a physical interaction between the burning metal particles, combustion by-products (such as nano-oxides), and the simulant of interest. Understanding this interaction will allow us to tune the chemistry and stoichiometry of composite metal powders for enhanced chemical agent defeat.

Using COMSOL Multiphysics, the group actively determines the concentration, velocity and temperature profiles for the combusting media inside the combustion chamber with varying design configurations. The CFD model will be used in conjunction with preliminary experimental configurations of the chamber to describe the combustion environment of particles ignited by a plasma as well as the proposed concentration profile of the simulant throughout the chamber due to the inlet flows. The scope of the model involves the use of steady-state and (in future) time dependent models to determine the mixing zones and proposed areas of interest for observing degradation of the chemical agent. The approach is to use Turbulent flow models to describe mixing zones and to couple these physics with Heat transfer and reacting mass transfer or chemical species transport equations. The model will be validated by experimental studies determining particle velocimetry and temperature profiles.

Understanding metal combustion reactions for propellants, pyrotechnics, or high explosives applications has been generally limited to experiments capturing optical emissions of single particles for reaction rates and temperatures and measuring pressure from aerosols or large-scale combustion tests. With X-ray Phase Contrast Imaging (XPCI), the evolution of the internal morphology and size of condensed phases at elevated temperatures during combustion can be obtained for multiple particles simultaneously. While XPCI can provide much needed information to establish and validate models and reaction mechanisms for complex metal systems during combustion, it does not provide a direct correlation to temperature or information on gas phase product species during these events. To address these limitations, a series of in situ experiments is proposed to study combustion of composite metal powders, identifying the time and spatially resolved phases and chemistries that control both their oxidation and their micro-explosions. The experiments will combine XPCI with simultaneous pyrometry and spectroscopy of hundreds of individual powders as they combust in air. The particle specific pyrometry and spectroscopy will be accomplished using the newly designed and proven Snapshot Hyperspectral imager for Emissions and Reactions (SHEAR) system. The combination of XPCI and SHEAR will allow us to identify the external and internal morphology of particles, their local temperatures, and their gaseous products as they combust, bubble, and micro-explode.

From preliminary tracking, particle trajectories are being utilized to form directed graphs to identify particle events. In the proposed work, we will explore the use of fast neural networks for anomaly detection and identifying particle events (such as bubbling, geometric changes, rate of bubble formation) for subsequent data analysis. The aim of the study is to extract time and particle resolved bubble growth, phases, and changes in particle size and morphology for burning particles in air and establish correlations to particle temperature, size, etc. that will help guide our understanding of multi-phase combustion in extreme environments based on materials with varying size and chemistries.

Atmospheric pressure or cold plasmas are not commonly used in conjunction with energetic materials, however preliminary plasma ignition studies have shown the ability of such plasmas to ignite stationary and flowing composite metal powders. Other studies have also shown increased combustion intensity and efficiency in the presence of plasmas for metals. This raises several questions including: how does an atmospheric pressure or a cold plasma, with most of the gas volume near ambient, ignite a metal particle that has ignition temperatures above 350°C? How do plasmas affect metal reactions during ignition/combustion? This study also explores the use of cold plasmas as a reliable ignition source for a particle laden jet/aerosol in varying environments. The scope of this work will also lead to the development of a comprehensive model to address plasma-metal powder interactions and mechanisms and the exploration of metal fuels that can ignite without mechanical or thermal impulse.